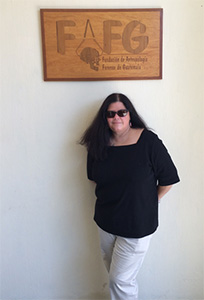 Arion T. Mayes is a professor of biological anthropology at San Diego State University.  She received her Ph.D. from the University of Colorado, Boulder, in 2001.  She is a Research Associate with the New York African Burial Ground and the San Diego Museum of Man.  Her work entails both national and international fieldwork in Oklahoma, California, and Oaxaca, Mexico, as well as the revitalization of unstudied museum collections. Her research in bioarchaeology and dental anthropology focuses on the effect of subsistence strategies on population health with an emphasis on transitional dietary regimes, and population variation as evidenced through morphological change, occupational stress, and disease processes. As one of the earliest regions of independent domestication of plants in the world, Oaxaca allows for temporally extensive studies of biocultural adaptations and the biological history of a region. She has authored several  articles and one book chapter regarding the early people of the lower Rio Verde of Oaxaca, as well several articles on population and dental variation in New World populations.  Dr. Mayes has received and participated in research grants and awards including the National Geographic Society, SDSU University Grants Program, NSF, and the National Museum of Natural History, Smithsonian Institution.